What is better than the gift of chocolate? Buy a Gift Card
$0.00

From The Beacon magazine
February 2018

As Valentine’s Day approaches, lovebirds will line up for chocolate-covered strawberries at Ruthie Carliner’s evocatively named Velvet Chocolatier shop in Stevenson Village. Her chocolates can also be found at Whole Foods, and Oprah included her creamy sea salt-topped caramel cups in her list of “favorite things” back in 2011.

But Carliner’s calling in creating decadent desserts is a far cry from her original career path.

As a young wife and mother, Carliner, a CPA with a master’s degree in taxation, worked for her father, Stanley Penn, owner of Penn Pontiac GMC Truck.

After his death in 1997, Carliner took over the business. Under her leadership, it grew into the largest GMC commercial
truck dealer on the East Coast.

But when the economy took a nosedive in 2007, a “stressed out” Carliner decided it was time to move on. The only problem? She had no idea what to do — until a class on chocolate turned her life around.

Carliner was always an enthusiastic baker and “a lover of all things chocolate.” And more than that, “I loved the science and math of it,” said Carliner, 56. “There’s a precision to working with chocolate that appealed to me.” 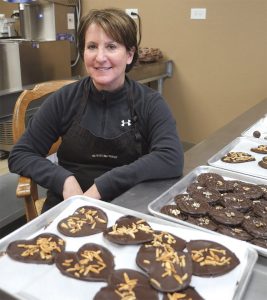 And as opposed to other forms of baking, chocolate-making is also well-suited to Carliner because it doesn’t call for heavy lifting. “I’m tiny,” she said. “I can’t lift pounds and pounds of sugar and flour.”

After much trial and error, Carliner developed a product she thought would appeal to customers, and began “peddling” her candy from store to store.

She soon found a home for the treats at Whole Foods in Mt. Washington. That brought her to the attention of the Whole
Foods’ national distributor. That, in turn, led to Carliner’s chocolates being noticed by Oprah Winfrey.

“That put us on the map, and opened us up to all sorts of possibilities,” said Carliner.

The Velvet Chocolatier’s moniker was suggested by one of Carliner’s best friends, and the theme is carried out through the brown velvet ribbon that adorns every box of chocolates.

Carliner prides herself on the fact that her handmade chocolates are gluten-free, kosher, contain no liqueurs or other additives, and are as sweetener-free as possible. The only time she uses added sweetenings are for her ganaches (fillings made from chocolate and cream), caramels and toffee.

“I want to grow the business so Sarah will stay!” Carliner said. For Hewitt’s part, what began as a way to earn some money in college has turned into a true passion.

The two often work side by side. Enter the shop, and you’ll see them clad in gloves and aprons, busy toasting nuts, tempering the rich Guittard chocolate, hand-dipping truffles, or hand-painting the caramel cup paper holders with melted chocolate.

Carliner explained that chocolate requires three things — time, temperature and motion. “When you are working with chocolate, the hardened form is melted and then very slowly brought to the proper temperature while spinning to create a smooth consistency,” she said. “When the chocolate is ready to be used, its shine and snap adds to the crispness of the flavor.”

“The experience of making chocolate captures all of my senses,” Carliner continued. “I enjoy every aspect of what I do. The atmosphere of my kitchen draws me in from the time I step in the door.”

And yes, if you’re wondering, Carliner and Hewitt do eat some chocolate every day. And no, they don’t get sick of it, nor do they get fat.

“Nothing is better for me than beginning the day with chocolate,” said Carliner. “It truly awakens my senses and makes me happy.”

While Carliner and Hewitt are partial to cashew chews, the toffee bark and caramel cups are the best-sellers.

In addition to local customers who know that the shop is both a kitchen and a retail location, Carliner has numerous corporate
clients worldwide, and an online store at theveltchveocolatier.com.

But those public hours are not by any means the only working hours for Carliner. When we spoke to Carliner, she had been at work since 3 a.m., making her “chocolate works of art.”

That doesn’t faze Carliner in the least, though. “I might love it even more [now] than I did when I started,” she said. “It truly is a labor of love.”